Stamp Family Farms is owned and operated by Kurt and Caroline Stamp. Kurt graduated from Iowa State University in 1980 with a degree in Ag Business. He was employed in the seed business as a District Sales Manager for Pioneer Hi-Bred for 18 years and Monsanto for 10 years.

Stamp Family Farms currently farms 2,800+ acres across Southwest Iowa with a crop rotation consisting of corn and soybeans with no-till and vertical tillage practices. Stamp Family Farms strives to keep all of our farm ground in top shape. We focus on tiling and terracing to maximize efficiency, quality, and profitability. Appearance is something often overlooked by some, but we believe that our farms’ cleanliness reflects on how we do business. Kurt and his sons are always actively looking to grow and improve their operation! 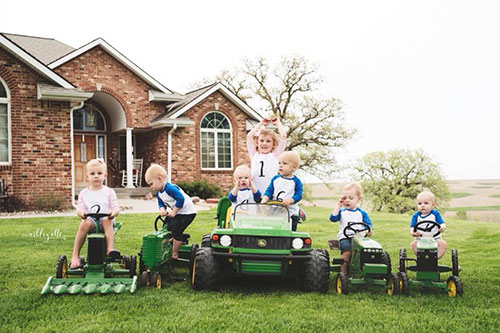 Caroline has worked in the ag industry along with Kurt managing a seed warehouse, performing bookkeeping, and weigh checks all while raising three children: Mike, Luke, and Calley. Caroline currently manages the books for the family farming operation, operates the grain cart in the fall, and babysits Mike and Amanda’s triplet boys! (If we are all honest with ourselves: Caroline is the glue to the operation)

Kurt and Caroline started farming part time in 1990 along with the seed business responsibilities and began full-time farming in 2000.

In the fall of 2012, sons Mike and Luke came into the operation part time. Both Mike and Luke graduated with business degrees from the University of Nebraska at Kearney in 2011. They have furthered their education by attending several Iowa State continuing education courses.

Prior to joining the farm operation, Mike worked in sales for an electrical distribution company for two years. In 2018 Mike joined Farm Bureau Financial Services as an Insurance Agent. Mike offices out of Logan, Iowa and services southwest Iowa. Mike’s role on the family operation is still very prevalent. Along with his day-to-day duties as an insurance agent, Mike continues to help with grain logistics, precision technologies, crop scouting, as well as helping with all harvest activities.

Since graduating college Luke has worked in several areas of the agriculture industry. Luke worked for E4 Crop Intelligence (consulting/precision ag/seed), Heartland Co-op (Agronomist), and currently works for Pioneer Seeds as a Territory Manager. While not working on his day-to-day duties Luke handles the seeds, fertility, data for the farm operation, along with helping during harvest.

Calley is a Dental Hygienist in Lincoln, Nebraska. She also helps on the farm along with her husband, Jeremy Fedde. They were married in 2015 and reside in Louisville, NE with their little boy Porter.

Provide landowners with quality agricultural services, while treating your land as if it were our own.

To GROW our operation through relationships built on hard work and integrity.